Due to our experience in Jagodina, we didn’t really know what to expect from our next host. He didn’t have much on his profile but accepted our last minute request we sent from Jagodina. For some reason we expected a derelict building with a dreadlocked hipster reeking of weed.

We couldn’t have been more wrong.

Viktor is an Erasmus+ student at the uni of Niš, but originally he landed in the city as a voluntary worker. He’s organising development programs and creative gatherings for the local youth. Or rather, he would organise, because as it turns out the agency employing him is barely using his knowledge and time; most of his errands are just driving people around and doing basic workshops every once in a while. What a waste of good skilled spaniard!

We spent most of Monday walking with him and his dog, Gato.

Gato is 10 years old and he traveled around Europe as Viktor’s accomplice since his puphood. He knows his way around the city, crossing the pedestrian crossings only along his owner, friend and mentor. Ignoring the pedestrians, honking cars, barking dogs, he’s following solely his nose and his own judgement. He is a great example of an animal having a character, and he’d be definitely one that could appear in a P. Howard book. We fall for him immediately!

Whilst Gato was meticuliously observing every single flower in the park, we were having a delightful chat with Viktor. It was truly enjoyable for us to have no language barriers and be able to have a deep conversation about life, work, studies and traveling. We even got a free lunch on Viktor in the local uni’s canteen – it was delightful to have the student cafeteria vibe again!

Gato and his owner, Viktor (or maybe the other way around) were our last minute hosts in Niš and we were truly sorry we only had a day with them. Both of them are brilliant characters, well travelled and it was very inspiring to spend a day with them. Viktor even sneaked us into the university canteen for a free lunch. :) – – – – – Nišben az utolsó pillanatban találtunk szállást az első esténkre, és még milyet! Gato és andalúz gazdája, Viktor (bár inkább fordítva) csupa szívvel láttak minket vendégül otthonukban és egy napot velünk is töltöttek, felfedezve a város néhány izgalmas szegletét. Viktor még az egyetem menzájára is becsempészett minket egy ingyen ebédre. Köszönjük!

Another three days in Niš

Saying goodbye to Viktor, our days in Niš just started to take shape.

A few weeks back, Zsofi put up an ad on CoushSurfing’s Niš page that we’re looking for a host for 2-3 nights. Just a day later, we got an excited message from Boki saying that he read through our entire blog and he loves the whole journey we’re doing, and so he invites us to stay with him. How could we say no to that? We were excited to meet him!

Based on his description, CouchSurfing seemed to be a popular thing in Niš and the hosts were in contact with each other on a weekly basis. TWe were looking forward to make the most of this: sightseeing, meeting loads of like-minded people and having enlightening discussions.

Our accommodation was in Boki’s flat, who’d just returned from celebrating his 40th birthday with his family on the countryside. Boki lives with his father Zoran, his sister and her daughter. A huge, 100 square meter flat with two balconies, one overlooking the park and the St Sava cathedral, was our home for three nights.
We also got an upgrade: Boki kindly offered us his bedroom, and we had no chance of resisting.

During our three days there we were being treated as dignitaries: got freshly brewed turkish coffee each morning, then visited the local market for fresh ingredients before noon. For the first lunch Boki cooked us a real delicacy, pork chops with a mushroom, vegetable and bacon sauce accompanied by fresh salad, cheese and crispy bread. A real hearty serbian meal, which definitely made into the top 3 best-ever-meals-in-Serbia (for Zsofi, it rocketed to number one, straight away). We had a wander in town and some coffee in the local coffee shop, and enjoyed meeting some of Boki’s friends randomly on the street.

We kicked off the next day again with marketing  - we procured some veggies, cheese and fresh chicken to make a basic but really tasty Hungarian dish: chicken paprikash with dumplings and cucumber salad, finishing with cottage cheese balls for dessert. Bea Palya was providing background music to enrich the experience.

Boki knows loads of people and always knows the right place to go to.

As a result of that, we got some freshly roasted and ground turkish coffee on the market – I say got and not bought: the owner gave it to us as a present after hearing the details of our trip.

Also, one evening, Boki introduced us to a peculiar method of having dinner: first we went to the local butcher to pick the meat, which they threw onto the grill right away. After that, a quick walk to the bakery to pick the right bun. Then a visit to the 24 hour fruit and veg stand at the corner of the market to enlist the salad if we wanted. Before returning to the butcher’s, grabbing a small satchet of mustard from the 7-11. Hand the newly acquired assets over to the butcher, go for a quick wander on the street and your fresh delicious burger is ready for consumption, with a price tag of about 100 dinars – 90 cents – each.

During sightseeing part of the day, we visited the Fortess of Niš and heard stories how important role it played in the past and how it does now by hosting a jazz festival every summer. We had some more coffee and met some more random friends of Boki’s along the way. The second evening was spent with Velja and his girlfriend Jelena – lovely people and both good friends of Boki’s, whose whome we got an insight into Serbian mainstream music and also the Serbian process of purchasing a vacuum cleaner.

We’ve also met Ali from Dubai, who was visiting his Serbian wife’s family. Well, let’s just say we quickly agreed on the fact that we’d rather not spend too much time with Ali; but meeting him certainly was an interesting experience. He was a standard know-it-all guy, sitting in his quality TH sweater talking about a night where he downed more than ten rakija shots – to impress the Serbian hosts, he was just clearly out of place for us.

On the other hand, that got us thinking – are we that out of place as well?

Are our clothes and behaviour still yell that we’re westerners who can allow to just travel around for a year, then jump right back to our comfortable jobs and life? Does anyone consider us the know-it-alls? Well, two crazy cyclists – as one of the host’s friend tagged us – on two heavily loaded bikes will always put us out of place in a way, but hopefully we can maintain the humble, curious and quiet approach as we travel along – and the road and the sun will soon take care of the posh look of our small wardrobe.

Our three days in Nis has been spent in this manner, getting a look into daily life, sightseeing, wandering in the city, cooking and bumping into Boki’s friends in various places. Smiles and hospitality everywhere.

Church of Holy Emperor Constantine in the St. Sava Park by Boki’s house.

But with this we barely scratched the surface.

Thinking back, we didn’t do much. We didn’t see too many sights in the city, yet these three days were one of the most powerful experiences of the journey so far, and put a lot of things into perspective.

Our host, Boki doesn’t have a job. Nor does his sister. So, at the moment, their father’s pension is the sole income for the family. Most of the people whom we met on the street are in the same or similar situation, without a steady job. The day starts with hitting the coffee bars in the morning, chatting, smoking, then having a walk. For lunch the first beer bottle is opened – a 2 litre plastic one, as that’s reasonably priced, 170 compared to 70 for a can, no brainer – which kind of gives a start to the day and loosens you up a bit. The hours after lunch are lively and positive but by the evening it’s ever so easy to slide back into the grim reality, where the lack of prospects kill motivation.

Winter is hard, people are waiting for the season to start, which might bring some changes. They might get a job in a construction site or a restaurant in Greece, maybe in Malta – without a permit, of course.

The lack of a common native language, our yet-to-be-polished historical/economical knowledge of the Balkans, or just our different background didn’t let us to even scratch the surface of the whole situation and to get a better grip on it.

Somehow we felt helpless and spoiled as foreigners travelling through, while our host did everything he could throughout the whole weekend to make sure we’re having a good time and we have everything we need.

By the time we were leaving we where full of emotions and questions which are still unresolved.

It was deliberating to reach the outskirts of Niš, to leave the cigarette smoke and the high risers behind and let the fresh countryside air wash out our lungs and thoughts.

There was one more stop before reaching Kursumlija, our border town: it was Prokuplje, we decided to have lunch here. For some reason we both felt very akward in this town: regardless of the positive events and nice sights there, we kept looking over our shoulders.

Naturally, we went to the market, where I got an apple for free (didn’t know that I look that desperate when I am on a market). Zsofi was glad to see that, as the last time I emerged from a market with a free item, it was a cigarette. We were slowly rolling through the town, Zsofi was popping into different shops, and I while I was waiting there was always someone walking up to me to ask some questions about our trip.

Yet somehow there was something weird about the town, we felt uneasy about the fact that the people were just coming too close to us, and the looks they were giving were somewhat different to the ones we got used to in the last three weeks. We kept our eyes on the bikes and we picked a quiet and secluded square for lunch.

Thirty minutes later, we were on the road again towards Kursumlija. In the end, regardless of the weird vibe in Prokuplje, we really dug it’s entire-wall-size-graffitis. We even took some pictures of them:

For the last 40 kilometres we set a slow pace, as Zsofi’s knees started acting up a bit. We used this sightseeing speed to share our thoughts on the last few days, specifically about the Couchsurfing community, which enables us to step into people’s daily life, with all of its ups and downs. It never stops amazing us how it can really open your eyes and give you a bit better perspective of the local life. 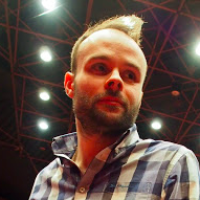